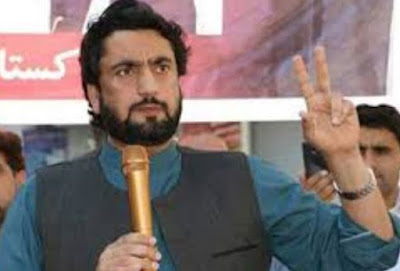 Kohat:
State Minister for Interior Shehryar Khan Afridi on Friday said Pakistan has waged a successful war against terrorism.
“The world is giving due respect to the sacrifices given by the people and armed forces of the country,” he said while addressing a function in Kohat University of Science and Technology.

Shehryar Khan Afridi lauded the nation for failing the heinous design of enemies of Pakistan to divide the nation.
The minister said Prime Minister Imran Khan has been recognized as the messenger of peace at international level.
He said Pakistan is a peaceful country and has rendered countless sacrifices in the war against terrorism.

He said visa policy has been made flexible to promote tourism.

Shehryar Afridi said the merger of tribal areas in Khyber Pakhtunkhwa will open new vistas for development.
Earlier in the month of January, Shehryar Khan Afridi had said nation had always emerged as victorious in every tough time.
Addressing the Passing out Parade of Frontier Corps in Peshawar, the minister said Pakistan had rendered matchless sacrifices in war against terror.
Afridi said the enemies of Pakistan will fail in their heinous designs in dividing us.
Pakistan wants friendly and peaceful relations with all its neighbours and opening Kartarpur border is a step towards this aim,” he maintained.