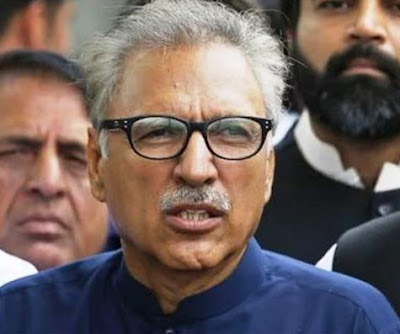 Islamabad:
President Arif Ali will meet the family of alleged ‘Daesh facilitator’ Zeeshan, one of the persons killed in Sahiwal shootout by the Counter Terrorism Department.
According to details, the president will meet the brother of Zeeshan, Ahtisham, in the federal capital and will discuss about the tragic incident.
Yesterday, Additional Chief Secretary Punjab Fazeel Asghar while briefing the lawmakers in an-in camera session, said that Zeeshan Javed was a facilitator of Abdul Rehman group of Daesh.

Asghar said the Sahiwal incident was a continuation of Operation Zulfiqar – an effort ongoing since 2017 to root-out the terrorist network from Punjab.

He said that Zeeshan was in contact with the terrorists, and was also involved in kidnapping of retired Brigadier Tahir Masood and Ali Hyder Gilani, son of former Prime Minister Yousuf Raza Gillani.
It is pertinent to mention here that the JIT in its initial report had declared character of Zeeshan ‘suspicious’, while Khalil and his family members had been declared innocent on January 22.
Sources privy to the matter have said the victims of Sahiwal shootout Khalil and his family were cleared, while suspicion was shown over owner of the vehicle, Zeeshan.