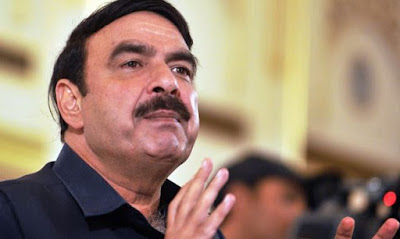 Lahore:
Federal Minister for Railways, Sheikh Rasheed Ahmed, on Saturday said the country was at the brink of bankruptcy, but Prime Minister Imran Khan saved it from this ‘catastrophe’, ARY News reported.
Addressing a press conference here, Rasheed said PM Khan played a key role in getting foreign conditions minimized in exchange for loans. “China, Qatar and Saudi Arabia extended their helping hand,” he added.
He opined that making Shehbaz Sharif as chairman of the Public Accounts Committee was a serious mistake [of the government]. Those who made him the PAC chairman will regret for the whole of their life, he said.
Regarding circular railway project in Karachi, he said “we retrieved pieces of land for the project as much as we could, now we can reclaim further land if the Sindh government cooperates with us,” he remarked.

He stated that the case of Asif Ali Zardari was bigger than the cases of Shehbaz and Nawaz.
Rasheed dismissed reports of PML-N, saying Nawaz Sharif and Maryam Nawaz would come to the streets in the past as well, but nothing happened.

The minister said he was certain that PM Khan will bring all responsible persons of the Sahiwal incident to book. “I know Imran Khan, and he is not going to spare anyone involved in the case.”
He announced that Pakistan Railways will run VIP trains between March 23 and March 30.